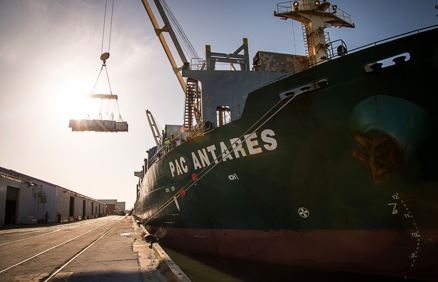 Raleigh, N.C. – North Carolina House Speaker Tim Moore (R-Cleveland) will tour the Port of Morehead City on Monday morning for a briefing on IT and infrastructure upgrades that are expanding its economic capability – including the port’s first new crane since 1968.

Cargo traffic recently reached an all-time high for N.C. Ports, which serves the coast in Wilmington and Morehead City and also operates an inland terminal in Charlotte.  Capital projects and facility improvements to attract larger vessels with increased productivity are benefiting the ports system amid rapid economic growth in North Carolina.

“The first new crane in 50 years for the Port of Morehead City and record container traffic for our ports system – these are powerful results of sustained investment in North Carolina’s economic resources,” Speaker Moore said.

Port operations contribute statewide to more than 87,700 jobs and $678 million each year in state and local tax revenues, according to N.C. Ports.  The system has the fastest growing port in the United States

In 2019, North Carolina was ranked the #1 state economy by CNBC and the Best State for Business by Forbes for the third year in a row.