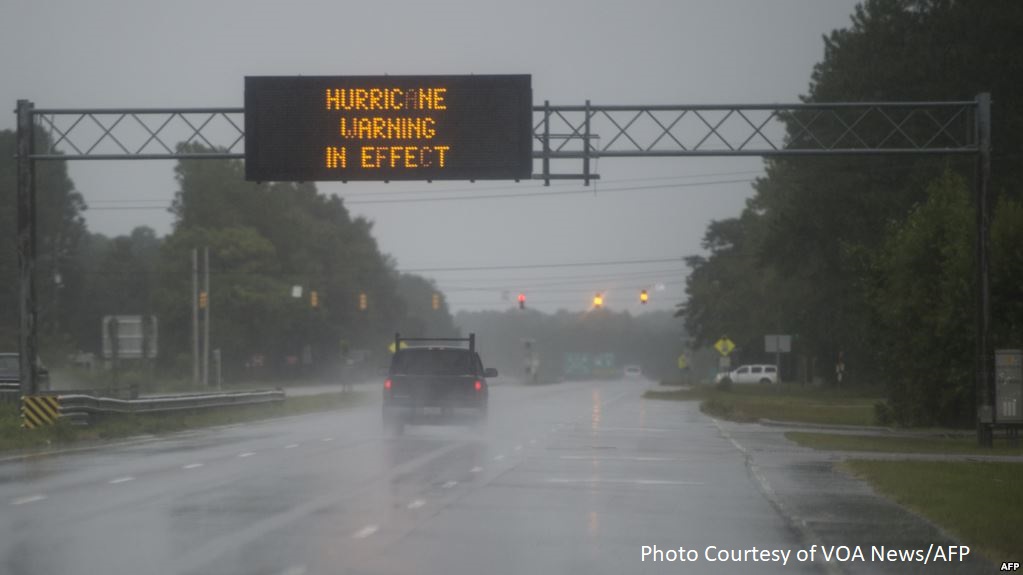 Officials urge people to stay off the roads, not return to most evacuated regions

The call focused on mounting road closures, travel hazards and traffic detours across North Carolina as a result of the storm’s continued rainfall that was expected to cause flash flooding and river overruns from the coastal and eastern regions to the sandhills and piedmont.  Landslides remain a concern in the mountains of the west as well.

Governor Cooper spoke directly to lawmakers at the start of the call:

“I want to thank legislative leaders from across the state for calling in and for also responding to your constituents like you have,” Governor Cooper said.

“This is an epic disaster.  This storm has begun moving across our state pushing the ocean into North Carolina, causing massive flooding.  This storm is also moving west and north, so those of you who haven’t seen the damage from this storm, you’re going to see some before it’s all over with.”

“Our number one concern right now is the safety of people and we’ve been doing a lot of preaching to keep people indoors and obeying evacuation orders.  The people of North Carolina have been pretty good about staying in off roads and in shelter.  But we know this event will continue with rising rivers in the east but also in the sand hills, southern piedmont, and into Charlotte, places that haven’t flooded before are going to flood.”

“As the storm turns west and north to the mountain areas we will see problems with flooding, mudslides and rockslides. We are very concerned at this point about not only people’s safety but the roadways.  There are significant road closures that are multiplying as we speak.  We have shut down Interstate 95 at the South Carolina and Virginia borders, telling people to go around our state.  The Department of Transportation is busily setting up detours in many areas of the state, and when they do often the detour roads flood.  So we are encouraging strongly and asking people to stay off the roads, particularly those who evacuated from the east and are in shelters or staying with friends and family in the piedmont and in the west. Do not go home yet.  It is not safe.  Roads continue to flood.  Rivers are rising.”

“We know a lot of communities out there that are nervously watching the rivers. A number of communities are underwater.  I have worked very hard along with the Emergency Management Division and our partners to make sure we have enough swift water rescue teams out there.  We got an early federal declaration.  We are going to work hard in this recovery process, but right now we are making sure people are safe.  Please tell your constituents to stay off the highways.  Not only is it extremely dangerous but you’re impeding rescue, and utility workers who are trying to get through these often blocked roads and trying to get power back to people.”

“I feel very confident we are resilient and can get through this together but it’s going to be a long term process when the storm leaves and the flood waters recede.  I’m going to do everything I can.  It’s extremely important we work together to make sure it gets done.  I have confidence that we can and we have the team in place to do it and all of you guys are an integral part of this team that we have in North Carolina that’s going to get back on our feet from this storm.”

“Another press conference is planned at 3:30 p.m. with Secretary Trogdon on the road situation that is changing as we speak,” Cooper concluded.  “Godspeed to all of you, I hope you’re in a safe place, stay in a safe place, we’re going to do everything we can to help your constituents.”

Officials from the state Emergency Management Division followed Governor Cooper with an additional update, telling lawmakers that FEMA granted an official emergency disaster declaration for 8 counties, and they are working with FEMA to get that number of counties increased.

Our regional administrator from FEMA is here and supports that.  This is an initial opportunity to get an expedited declaration and open recovery funding channels.  We are going to be asking FEMA for more counties as we get the information, our recovery team as well as the FEMA recovery staff are already identifying those areas to gather necessary data to go back to FEMA and add more counties to that list.  We anticipate the list to expand pretty rapidly, especially as we look at westerly track of our storm that will impact a significant portion of our state.

Currently 89 counties have a local state of emergency that has increased.  We are hovering around 150 shelters and about 20,000 residents in those shelters, but as flood waters and wind sstabilize and people can move around we expect that to go up.  Power outage is a moving target of 700,000 people, and all the energy co-ops and utility providers are pouring resources in to deal with those power outages.

We are now fighting an eastern and western event, trying to move resources to the east for the main impact but also to the west as they begin to feel impacts of the wind and rain.  From an operational standpoint the Emergency Management Division is focused on general and medical sheltering, and swift water rescue on aviation and water platforms.  The NCDOT is looking to start using high clearance vehicles to do evacuations, and monitoring the energy sector for critical infrastructure needs for facilities like hospitals and the services they need.

The public safety teams have fully disenengaged from the world equestrian games to push those resources into eastern North Carolina, they are fully disengaged from that event to support areas impacted by the storm.

We are planning for weeks, not days, in terms of expectation on power restoration unfortunately.

If constituents have questions, the 2-11 and Ready NC app remain the best source for information. There’s a resource publicly facing, a flood innovation mapping alert network, FIMAN, that is on a public facing network with river gauges across the state overlaid with weather forecasts about where flooding is anticipated.

We are expecting flooding across I-95 and I-40.  Goldsboro and Kinston are going to experience significant flooding.  Lawmakers continue to provide support and information passed along to make sure they can allocate resources appropriately to support local counties.

With the hurricane force winds and weather constraints officials have not been able to move a lot of commodities and public safety personnel safely, but that changed overnight and many commodities not staged pre-landfall to allocate appropriately are now on the road to affected jurisdictions today, those commodities we’ve seen requests for are moving overnight and into this morning.

Resource allocation efforts pre-staged as much equipment into forward areas as possible and then pushed forward to potentially impacted counties smaller caches of equipment to get them through, so officials could see where the most significant landfall impacts are going to be.  That’s why officials didn’t push forward every request made initially. Now they can push forward as they can see what’s most needed post-impact.  For others with resource requests, remind them to go through local emergency management agencies to make sure that’s coordinated and resources are where they need to be.

Road conditions across nearly all of North Carolina are rapidly deteriorating.  Road closures are coming in exponentially every hour.  We have 252 closures as of the 2:30 p.m. briefing, but by the end of the call it should be more than that.

As Florence pounds North Carolina flash flooding will increase moving east to west as the system moves very slowly across the state.  Some experts from the National Weather Service are predicting 10-15 more inches of rain in lower North Carolina.  Beginning late this morning flash floods began closing major US. .routes and N.C. routes including I-40 east and parts of I-95 near Cumberland Harnett line, including Kinston and Newport.  People should find a safe location on higher ground and remain there. Flooded roads cleared now could soon become flooded.

There remains a high risk of tree failing and other roadway hazards.  Wind and ground saturation are causing that problem. Ground crews are out doing cut and shove operations to clear the roads.  It is increasingly difficult to identify the needs and reach them.

Significant flooding has reached South Carolina as well.  We are working with transportation officials in South Carolina to identify alternate routes with lowest possibility of flooding. Local roadways in the state at varying degrees of risk today and tomorrow, major river flooding anticipated into early next week.

Since flash flooding happens so fast, find high ground and remain there.  Out of state travel is being detoured completely around the state,  an extremely long detour around North Carolina that offers the lowest risk of flooding.  NCDOT is working with state highway patrol and emergency managemnt and national guard, the Department of Defense and local law enforcement to ensure critical supplies and personnel are still being delivered to impacted areas.

Fixed wing aircrafts and drones will begin being used in these areas by DOT as soon as tomorrow to assist in those efforts.

Secretary Mandy Cohen from the Department of Health and Human Services said they are working to be in contact with long term care facilities in impacted areas and flood mapping is being shared with local responders.  We know of a number of them on generators and are continually checking in on them to make sure they have what they need.  A mobile hospital is being moved into Kinston today for response, three medical centers remain in Clayton, High Point & Goldsboro with availability in the Clayton center. Stay off the roads and if you have to drive stay away from flood waters.

Other updates came in response to questions from lawmakers.  Robeson County is pumping water from one location to another, other counties have varying levels of upmping capabilities, there is some state, federal and private sector capability to pump water.  If there is an identified need to pump more water reach out to the state EOC.

High risk dams, coal ash and hog lagoons continue to be monitored closely, risk management teams plan to fly over some of the major dams as well as lagoons, infrastructure breakout rooms are holding daily conference calls and monitoring areas of those high risks.

At this point there are no unmet needs to work on containing those lagoons but they do anticipate more resources needed to deal with that but it’s high on the director’s list and it’s a priority for the mitigation actions being taken.

As the storm’s track shifted overnight and the storm stalled, the current forecast for rain in the Charlotte area decreased slightly but is still approximately 7-10 inches for Mecklenburg County and surrounding counties in the region including parts of Rowan County.

Conditions on I-77 may deteriorate rapidly as rain moves into that area because there was a significant amount of rain shown in that area, and while parts of I-77 haven’t seen issues before, that’s what we’re seeing, is areas that have never seen flooding before are seeing it.

The fastest access to information on shelther locations is through the ReadyNC app as evacuations continue around rivers, especially in Cumberland County region.

Officials and lawmakers plan to hold another legislative update on Sunday around 2:30 p.m.

Details of  legislator briefings on Tropical Storm Florence were also released to the public on Monday, Wednesday, and Friday of this week.