Today a three judge panel blocked North Carolina’s voter ID law, which 56% of North Carolina voters supported in a ballot measure in 2018.
Sam Hayes, General Counsel for North Carolina House Speaker Tim Moore, said, “Once again, liberal judges have defied the will of North Carolinians on election integrity. Voters of this state have repeatedly supported a voter ID requirement – going so far as to enshrine it in our state constitution. Senate Bill 824 is one of the most generous in the country, and it was modeled on those of other states. At trial, Plaintiffs could not produce a single witness who would be unable to vote because of the law.”
He continued, “In his dissent, Judge Poovey noted that “[n]ot one scintilla of evidence was introduced during this trial that any legislator acted with racially discriminatory intent.” In fact, the bill was co-sponsored by African-American State Senator Joel Ford. This fight is far from over. We look forward to appealing this partisan ruling on behalf of the people of North Carolina.” 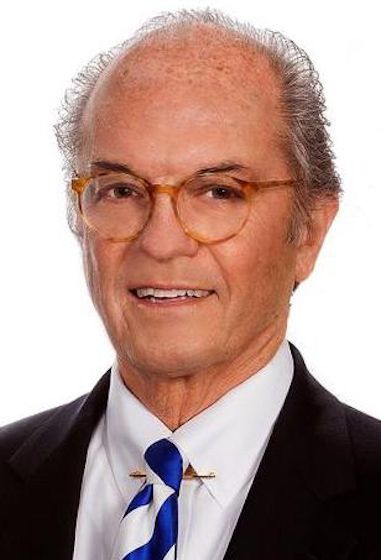 North Carolina House Speaker Tim Moore has appointed Gus Tulloss, President and CEO of Gus Tolluss Insurance, to the North Carolina Ports Authority.
Tulloss is a former member of the UNC Board of Governors and Honoree of the East Carolina University Alumni of the Year Award. Gus received the East Carolina Boy Scout Distinguished Service award in 2005 and Rocky Mount Chamber’s Distinguished Citizen of the Year award in 2016. He is a member of State and National Association of Life Underwriters and a former member of the North Carolina Department of Transportation.
Gus has been a licensed insurance agent since 1989. He is a 1966 graduate from East Carolina University with a BS in Business Administration. Gus is a former President of the North Carolina Jaycees, Rocky Mount Rotary Club, and Rocky Mount Chamber of Commerce. He is past Chairman of the Salvation Army Advisory Board and Benvenue Country Club. 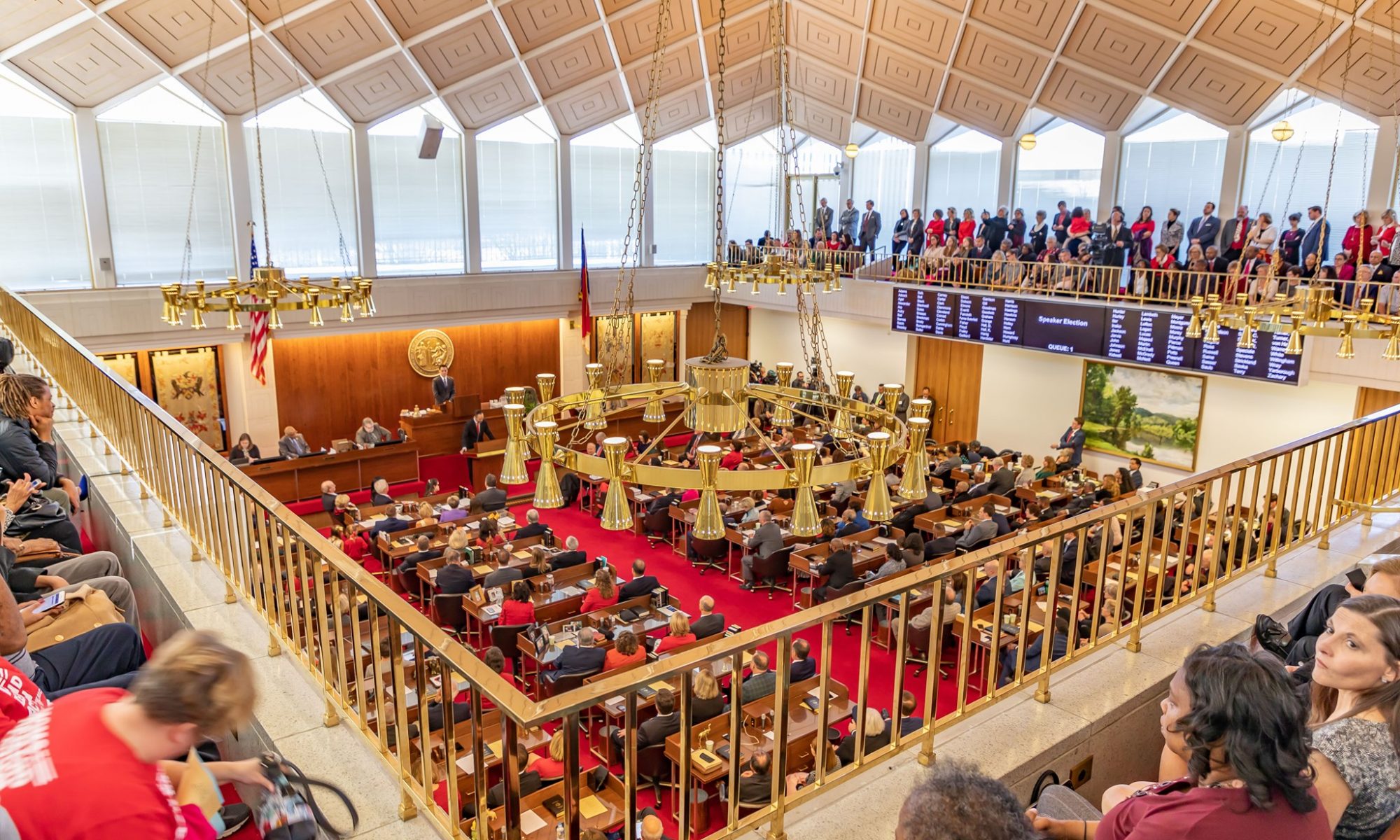 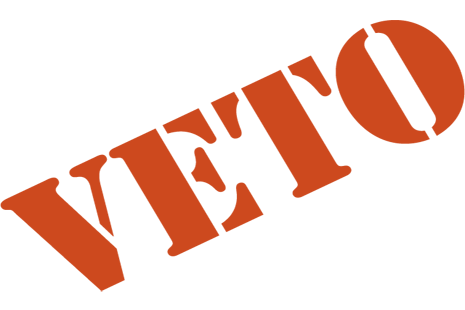 Today Governor Cooper vetoed two common sense bills. House Bill 805 would have enforced harsher penalties for rioters while striking a common sense balance of cracking down on violence while preserving the first amendment rights of protestors. House Bill 324 would have protected students from discrimination in the classroom and teachers from discriminatory and radical training programs.

House Speaker Tim Moore said, “Last year, I watched rioters cause enormous damage to downtown Raleigh while the Governor did nothing. Today’s veto is another slap in the face to the small business owners and residents of cities and towns across this state that were damaged by lawless riots.”

“House Bill 805 is a common sense bill that would have protected small businesses and individuals in the event that a protest became violent and focused solely on the perpetrators of violence rather than peaceful protestors. Every suggested change to improve the bill from the other side of the aisle was incorporated. Unfortunately, for this Governor pandering to the far left is more important than the rule of law.”

He continued, “The governor also vetoed House Bill 324 today, which would have ensured that students of every race would be protected from discrimination in the classroom. I am disappointed that Governor Cooper would block legislation that simply protects students or teachers from being forced to accept the false idea that one race is superior or inferior to another.”

Today the North Carolina Court of Appeals blocked a lower court ruling in a felon voter rights case, granting a petition for a writ of supersedeas and staying the expanded injunction pending appeal.
This decision comes after legislative leaders asked Attorney General Josh Stein to immediately appeal the lower court’s verbal order. When Stein refused to act, legislative leaders fired Stein and hired outside counsel.
Sam Hayes, General Counsel for House Speaker Tim Moore said, “We are pleased with the Order upholding the rule of law, which was issued today by the North Carolina Court of Appeals.”
He continued, “I want to thank our excellent legal team led by David Thompson, Pete Patterson, and Nicole Moss with the law firm of Cooper & Kirk. Despite the Attorney General’s complete abdication of his duty, they stepped in and scored a major win for the people of North Carolina. Although this fight is far from over, we are confident that the Constitution will prevail in the end.” 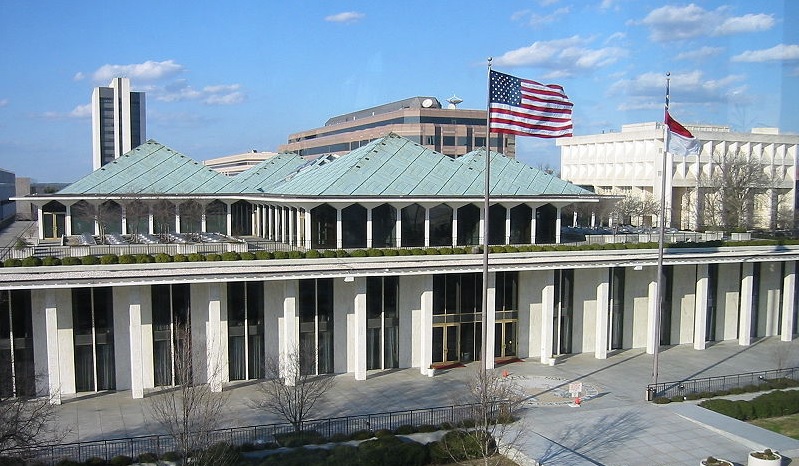 Today in a vote of 63-41, the North Carolina House advanced House Bill 805, a bill to “Prevent Rioting and Civil Disorder.”
House Speaker Tim Moore said, “North Carolinians should never have to choose between exercising their First Amendment right to freely and peacefully demonstrate and their safety.”
He continued, “This bill simply enforces harsher penalties for the perpetrators of violence and looting, while explicitly preserving every North Carolinian’s right to protest peacefully. I hope that Governor Cooper will not hesitate to sign this bill into law and better protect our law enforcement, business owners, and citizens who are exercising their right to protest peacefully.”
The bill now goes to the governor’s desk for his signature.

Today Governor Cooper vetoed HB 398, the “Pistol Purchase Permit Repeal.”
In May, HB 398 passed through the House in a vote of 69-48. The bill passed in the Senate in a vote of 27-20. HB 398 would have repealed the requirement to obtain a pistol purchase permit from the sheriff prior to the purchase or transfer of the pistol.
House Speaker Tim Moore said, “At the height of the pandemic, many North Carolinians felt they needed to purchase a handgun for personal protection, but they were faced with a problem: sheriff’s departments were overloaded with requests for pistol purchase permits. This bill would have provided an avenue for those individuals.”
He continued, “To deny North Carolinians a path to obtain that measure of personal protection is to deny a fundamental constitutional right. Governor Cooper is playing politics with our Second Amendment rights.” 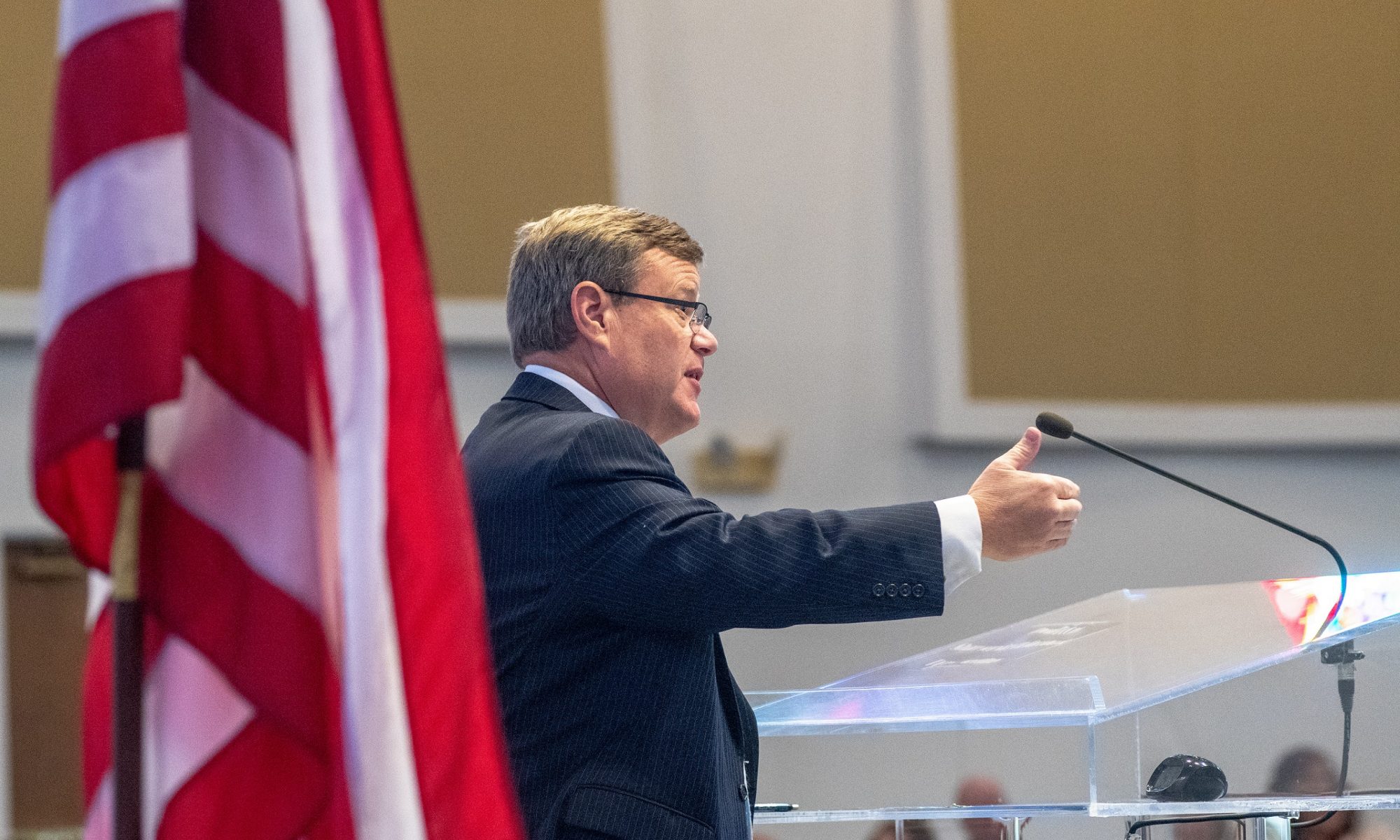 This week, in a vote of 25-19, the North Carolina Senate passed House Bill 805, a bill sponsored by House Speaker Tim Moore to “Prevent Rioting and Civil Disorder.”

House Speaker Tim Moore said, “I saw firsthand the violence and destruction caused by rioters right here in downtown Raleigh last year. What this bill does is enforce harsher penalties for the perpetrators of violence and looting, while preserving every North Carolinian’s right to protest peacefully.”

The bill will return to the House for concurrence. 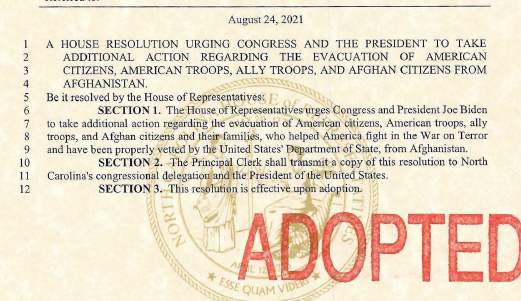 Raleigh, NC— Today, an op-ed from North Carolina House Speaker Tim Moore (R-Cleveland) was published at Townhall.com. The piece is entitled “As a Free Afghanistan Fades Before Our Eyes, We Must Fulfill Our Obligations to Our Veterans and Allies.”
Additionally, this morning Speaker Moore introduced a resolution on Afghanistan. It passed unanimously through the House.
House Resolution 973 declares, “The House of Representatives urges Congress and President Joe Biden to take additional action regarding the evacuation of American citizens, American troops, ally troops, and Afghan citizens and their families, who helped America fight in the War on Terror and have been properly vetted by the United States’ Department of State, from Afghanistan.”

The Principal Clerk will transmit a copy of the resolution to North Carolina’s congressional delegation and the President of the United States. 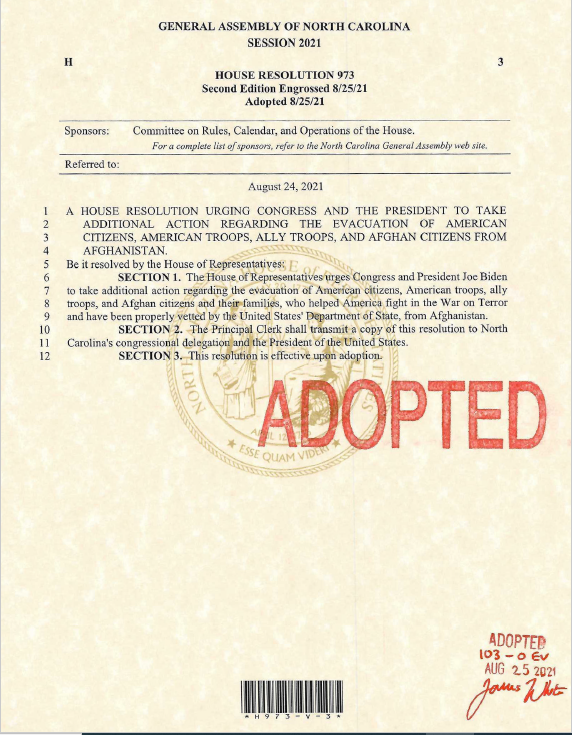 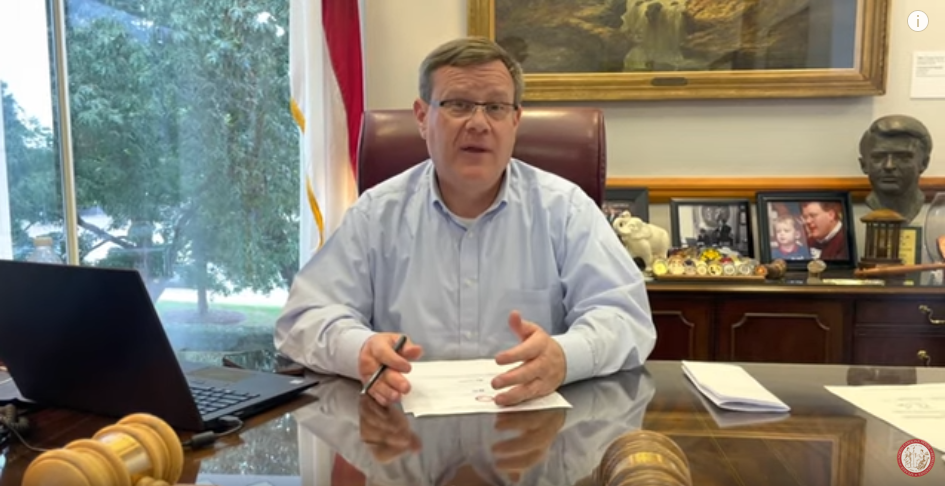 Raleigh, NC— This week, North Carolina House Speaker Tim Moore (R-Cleveland) called Governor Cooper to urge him to open our state to our Afghan allies who have been thoroughly vetted and granted Special Immigrant Visas by the US Department of State for their service alongside our military.

Many of these men and women served with multiple units from our Marine Corps Base at Camp Lejeune, North Carolina and our Army base at Ft. Bragg, North Carolina. Throughout Operation Enduring Freedom, these allies risked their safety and security to fight with us against Taliban forces.

Following the call with Governor Cooper, House Speaker Tim Moore said in a video, “What does it say if our country does not stand up and stand by those who fought with us? We need to stand by our word. We need to honor the commitments we made when so many folks took that oath, took a stand, put their lives on the line to fight for freedom, to fight for the ideas of America. It’s our turn to honor that commitment and do all we can to help these folks find freedom.”

Watch the video in full here.