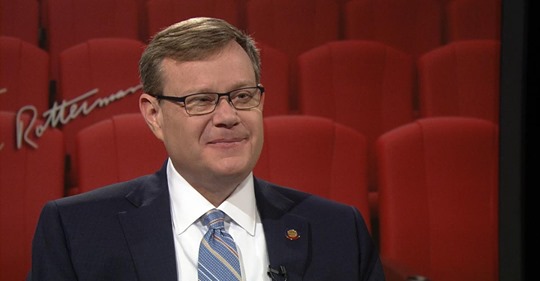 Raleigh, N.C. – A conversation with state House Speaker Tim Moore (R-Cleveland) about budget, healthcare, immigration, and other current issues at the North Carolina General Assembly will air statewide on UNC-TV this weekend on Front Row with Marc Rotterman.

Speaker Moore sat down for a half-hour discussion with Marc Rotterman and spoke about the Governor’s veto of public safety and immigration legislation supported by the N.C. Sheriffs’ Association.

“That is probably my single greatest disappointment with what the Governor has done,” Speaker Moore said of the Governor’s decision to veto House Bill 370 Require Cooperation with ICE Detainers.

“It’s a terrible situation – this is a $24 billion budget that funds everything from public safety, to roads, to school spending, teacher pay, state employee pay, you name it,” Speaker Moore said.  “He is holding all of that up over one issue, and that’s Medicaid-for-all.”

“Even with all of the expansion that we funded in this budget, we can still refund that money to the taxpayers,” the Speaker said.  “The core question is this – whose money is this?  Is it the government’s money?  Well, no.  This money is from the taxpayers.  If we have enough to cover what we need, we should refund the excess to the taxpayers.”

“To be able to buy health insurance as a group would save those individual and self-employed members money,” Speaker Moore said of Senate Bill 86 Small Business Health Care Act, a measure currently awaiting approval by the Governor.

The General Assembly’s vision for reforming North Carolina’s approach to the tax code and state budget has been a success, Speaker Moore noted, and he said he is committed to maintaining that record of results.

“We knew we needed to make government more efficient, we need to not waste money, and we need to cut taxes and spur the economy,” Speaker Moore said.

“We started that process, and it worked.  If you look at where we are, Forbes ranks us the best state in the country for business.  For years we were lagging behind our neighbors, now we’ve passed them, and we’re only continuing to grow.”

“My hope was Governor Cooper would understand we’ve made a lot of great changes – don’t mess it up.  But he keeps vetoing these budgets.”

Watch Speaker Moore discuss these topics and many others in the full interview on UNC-TV this weekend.