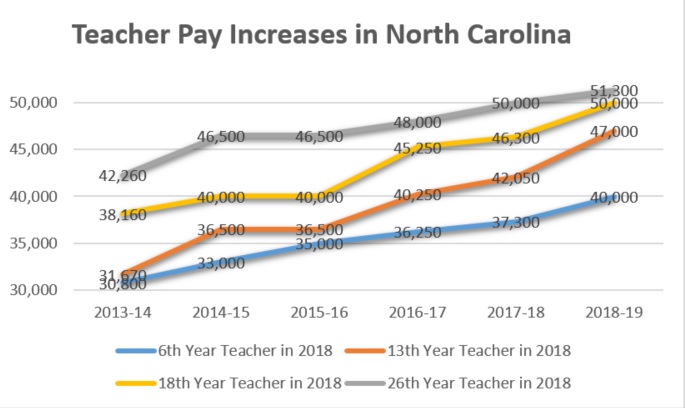 Moore and Berger said teachers should expect to see an average 6.2 percent pay raise in the 2018-19 school year alone. Under the current 2017-19 state budget, teachers are scheduled to receive an average $4,412 raise, after lawmakers overrode Gov. Roy Cooper’s veto last year. And unlike a recent proposal from the governor, lawmakers will pay for the raises without a tax hike.

The leaders also unveiled a transparent new tool at www.ncteacherraise.com designed to help teachers, parents and the public understand the total increase to base teacher pay since 2014 under Republican leadership.

According to the General Assembly’s nonpartisan Fiscal Research Division, the average teacher salary for the 2018-19 school year will be roughly $53,600. That’s an average $8,600 – or 19 percent – pay raise compared to the 2013-14 school year. At www.ncteacherraise.com, teachers can view the increase to their individual base pay over the same period by entering their current number of years in the classroom. The base pay figures do not include any benefits, state or local supplements or bonuses.

“After taking over from Democratic leadership that furloughed teachers and froze their salaries, Republicans in the General Assembly made a promise to dramatically raise teacher pay in North Carolina – and we’ve kept our promise,” said Berger and Moore.

“Despite the lack of information in the media and the politically-motivated misinformation coming from the local affiliate of the national teachers’ union, the numbers speak for themselves – and we’re glad to have the opportunity to share North Carolina’s success story and set the record straight.”

The substantial increases also add up to far higher lifetime earnings. Under the pay plan put in place by Republicans, a teacher will earn $233,000 more in base pay alone over a 30-year career than he or she would have earned under the Democrats’ old plan.

Other bonus programs and compensation incentives for North Carolina teachers include: