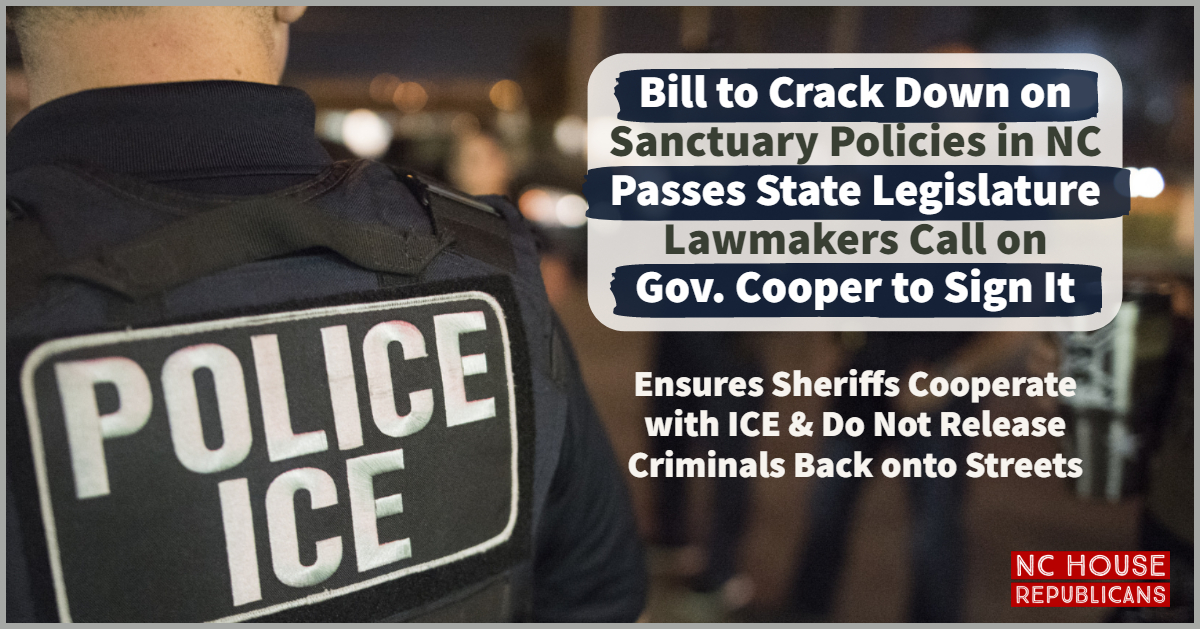 Multiple sheriffs in metropolitan North Carolina counties are currently refusing to cooperate with ICE and are releasing accused criminals despite requests from federal law enforcement to detain those individuals.

H.B. 370 would require confinement facilities to comply with detainers and administrative warrants issued by ICE, and authorizes the removal of a sheriff from office for failing to comply with ICE detainers.

The North Carolina Sheriffs’ Association supports the bill as a “high priority.”

“It is the Association’s position that this edition of House Bill 370 provides an appropriate and careful balance under the Constitution for the rights of the accused and for the public safety of our communities,” the Sheriffs’ Association said in a release about the bill.

“For these reasons, the Association SUPPORTS – HIGH PRIORITY enactment of this edition of House Bill 370 by the North Carolina General Assembly.”

“The bill before you today would put a stop to these policies,” Rep. Hall said.  “It only applies to illegal immigrants who have been charged with crimes in North Carolina.  It codifies what almost every sheriff in this state is already doing.”

“That’s why the North Carolina Sheriffs’ Association has endorsed this bill as a high priority – because they know it’s a sheriff’s job to do everything they can to protect their community.”

“These sheriffs are putting partisan politics ahead of public safety, and there’s no way around that.”

Rep. Carson Smith (R-Pender) was the sheriff of Pender County for 16 years and is a co-sponsor of the legislation.

“If you’re a citizen in a county jail and wanted for violation of federal law by federal law enforcement officers, you can bet you’ll be turned over to them,” Rep. Smith said.

“Why then, shouldn’t sheriffs turn over a noncitizen?  Why should they be let go for continuously violating the law?  I believe that’s just wrong.”

ICE officials recently announced the arrest of a Honduran fugitive who they say was released by Mecklenburg County despite rape and child sex offense charges.

The agency arrested 33-year-old Oscar Pacheco-Leonardo, a Honduran national, during a targeted enforcement operation in Mecklenburg County on August 9.

The arrest came nearly two months after the Mecklenburg County Sheriff’s Office refused to honor an ICE detainer and released Pacheco-Leonardo following his arrest on first-degree rape and indecent liberties with a minor charges.

“The public and media outcry against these sanctuary policies shows why we cannot allow sheriffs to release fugitive criminals who are in North Carolina illegally from our county jails,” Rep. Jones said.

“The sheriffs agree that it’s a good idea.  If it’s good enough for the citizens of North Carolina to have to uphold these laws, it’s good enough for someone who could have a detainer on them.  This only applies to arrested criminal illegal immigrants.  This bill is not targeting anybody.”

Rep. Jason Saine (R-Lincoln) is a co-sponsor of the bill and thanked the N.C. Sheriffs’ Association for its support of the legislation.

“We appreciate the Senate and the Sheriffs’ Association working with us to consider this critical issue for public safety in North Carolina communities,” Rep. Saine said.

“Ignoring our nation’s law enforcement officers by releasing criminal illegal immigrants is an unacceptable practice we must put a stop to.”

State House Speaker Tim Moore (R-Cleveland) spoke during debate and said if law-abiding North Carolinians are subject to enforcement of federal law, illegal immigrants accused of crimes should be too.

“Our first priority as state lawmakers is to protect the people of North Carolina,” Speaker Moore said.

“To have sheriffs think it’s a good policy, for a political reason, to release dangerous criminals onto the street who are accused of rape and other serious crimes and not honor detainers, does not make sense.”

“There comes a time when even someone who is politically elected, should be able to put aside politics and do what’s right for public safety.”