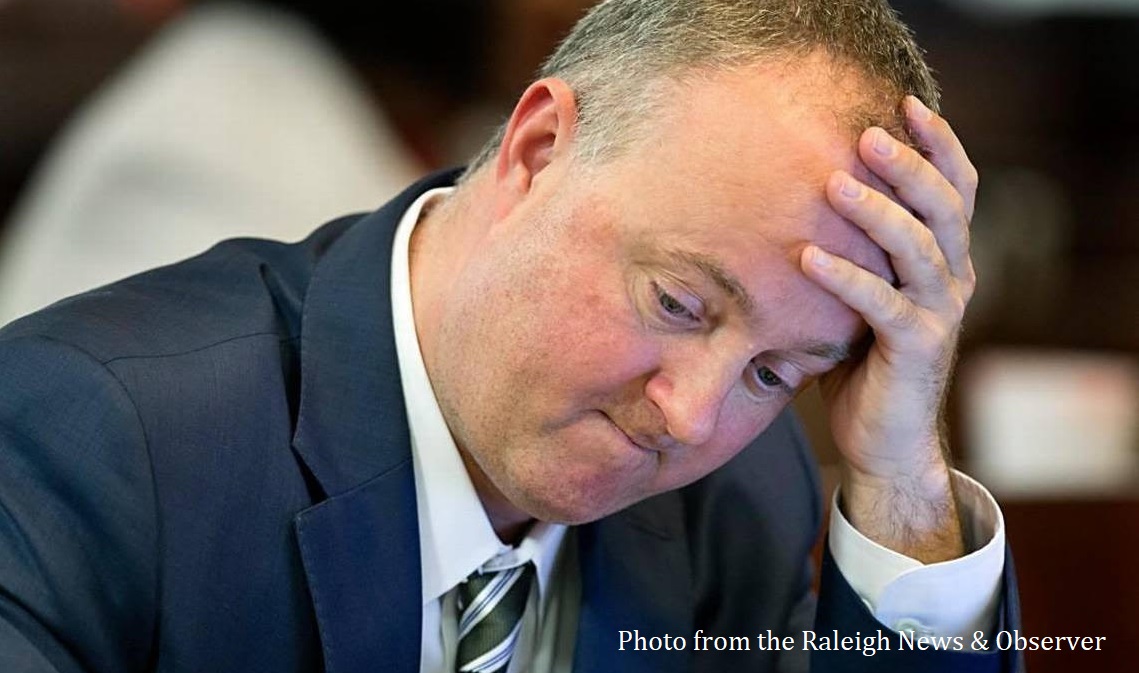 Raleigh, N.C. – State House Democratic Leader Darren Jackson (D-Wake) completely contradicted his own prior statements and the contents of surveillance footage he claimed the Speaker’s office was hiding on Monday – footage that was immediately shown to the Capitol Press Corps to disprove the entire basis of his bizarre and false claims.

In a troubling display at the North Carolina legislature while both chambers are in recess this week, Rep. Jackson insisted he was lied to about the veto override session on September 11, 2019 – a claim that completely contradicts his prior insistence that he did not believe Republican leaders had intentionally misled him.

In a total 180-degree reversal from his statements on the day of the budget veto override, Rep. Jackson on Monday accused House Republican leaders of lying to him and demanded they take a lie detector test for which he would write the questions.

“House Republican leadership lied about the session on the morning of September 11,” Rep. Jackson said Monday, contradicting his prior insistence that Republican leaders had not lied to him. “They have continued to lie about it since.”

Rep. Jackson then urged members of the Capital Press Corps to file public records requests for surveillance footage from the House floor that he claimed was being withheld because it proved Rep. Jason Saine (R-Lincoln) was prepared for the vote because he read the motion to override the veto from his cell phone.

“Rep. Saine comes in from the side and immediately takes his seat,” Rep. Jackson claimed. “The Speaker’s attorney speaks to him and Saine never looks up.  He is recognized for the purpose of a motion, and reads a motion, apparently from his phone.”

The footage shown to the press corps clearly shows Speaker Moore’s Chief of Staff deliver the motion to override the veto on a piece of paper to Rep. Saine – who does in-fact look up – they have a conversation with him at his seat, and then Rep. Saine reads the motion from the piece of paper, not his phone.

“Video shows Rep. Saine receiving a piece of paper from speaker’s chief of staff, which we’re told contains override motion,” the editor of the News & Observer’s ‘Insider’ service tweeted on Monday after being shown the footage.

The entire basis of Rep. Jackson’s bizarre claim that surveillance footage showed Republicans were prepared for the vote because Rep. Saine read the motion from his phone was in-fact a lie that was immediately disproven by the video itself and confirmed by capital reporters.

Rep. Jackson further made other false claims about the video – asserting Rep. Saine entered the chamber from the side, when video clearly shows he enters from the back and walks to his desk following the prayer and pledge of allegiance.

Rep. Jackson further claimed the video shows Republicans were prepared for the veto override because they showed “no facial expression changes” during Rep. Saine’s motion.

The editor of the Insider service again refuted this claim on Twitter, writing “it’s a wide angle shot and you can’t see faces in detail.”

None of the Capital Press Corps reporters who viewed the surveillance footage together have asserted the video corroborated Rep. Jackson’s strange insistence that it was some kind of smoking gun.

Rep. Jackson also falsely claimed that because the House Majority Whip reminded a member by text message to attend the 8:30 am voting session – an everyday practice that is literally the whip’s job and was revealed to Rep. Jackson by Republicans themselves – somehow indicated the Republicans were preparing for the veto override.

Facts prove otherwise. House Republicans had just 55 members on the floor the day of the veto override – not enough members to hold a quorum for a vote if Democrats had walked off the floor, or to command a majority with House Democrats present.

Among 10 Republicans absent from the veto override session were the House Majority Leader, the House Rules Chairman, and the Speaker Pro Tem.

House Republicans have consistently struggled to maintain enough members on the floor to hold a majority during voting sessions this Fall, which is why the Majority Whip reminds members to attend voting sessions, particularly early in the morning.

This baseless assertion by Rep. Jackson led to another series of strange and direct contradictions in Monday’s press conference.

Rep. Jackson recalled a story when House Democrats attempted to call for the budget veto override while holding a majority on the floor with a dozen Republicans absent – then claimed there was never a situation where such a circumstance could occur.

“Just a few weeks earlier we had outnumbered the Republicans one day, and you saw how they handled that,” Rep. Jackson said, recalling a surprise effort by House Democrats to motion for a vote on the veto override while their party held a majority on the floor of the House.

Rep. Jackson then immediately contradicted his own prior statement, claiming “there is no situation where we would ever outnumber them and be able to do something without their consent,” which he had literally just recalled trying to do in such a circumstance a few weeks prior.

Speaker Moore on Monday called Rep. Jackson’s bizarre contradictions and false claims a “transparent attempt to cover for his own failures to lead his caucus.”