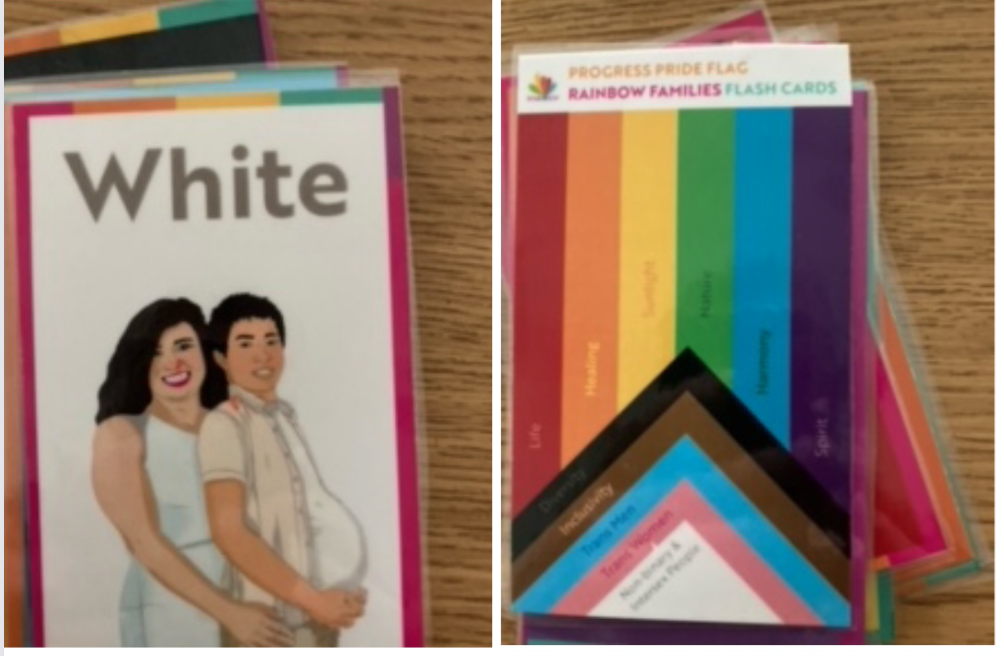 ShareTweet
This week Rep. Erin Paré (R-Wake) received an email from a concerned constituent alerting her to the use of LGBTQIA+ themed flash cards, including a card with the depiction of a pregnant man, to teach colors to children in a preschool class at Ballentine Elementary School, part of the Wake County public school system. Rep. Paré received images of the cards from her constituent. (pictured above)
Rep. Paré immediately contacted the principal of the elementary school to alert her of this constituent concern and to confirm the use of the flash cards in the classroom. The principal of the school took swift action to investigate and respond to the information.  The principal found the stack of cards in a preschool classroom and verified with the teacher that they had been used by the teacher in the classroom to teach colors. The principal confirmed that the flash cards were not part of approved curriculum and that she was unaware that they were being used. The principal immediately took possession of the cards, contacted the WCPSS area superintendent, and engaged human resources.  The principal expressed appreciation for the constituent’s information via Rep. Paré, as she would not have known about the flash cards otherwise.
In a poll released this week, North Carolina voters (57%) overwhelmingly supported the idea of passing legislation that would “make parents the primary decision-makers regarding their child’s health and medical decisions and provide parents with opt-out options regarding controversial surveys or age-inappropriate classroom materials.”
The members of the North Carolina General Assembly are currently reviewing legislation to address this very concern. Parents deserve to know exactly what and how their children are being taught.
“I am grateful that a concerned constituent reached out and that this issue is being addressed in a swift and professional manner by Ballentine Elementary School,” said Rep. Erin Pare (R-Wake).
“Schools should only be using age-appropriate materials, and these flashcards clearly do not meet that standard for a pre-school classroom. I hope schools across Wake County and the State of North Carolina will follow the example of Ballentine and respond swiftly when a parent expresses concern and ensure that materials like this are not being used to teach young students.”
###
ShareTweet