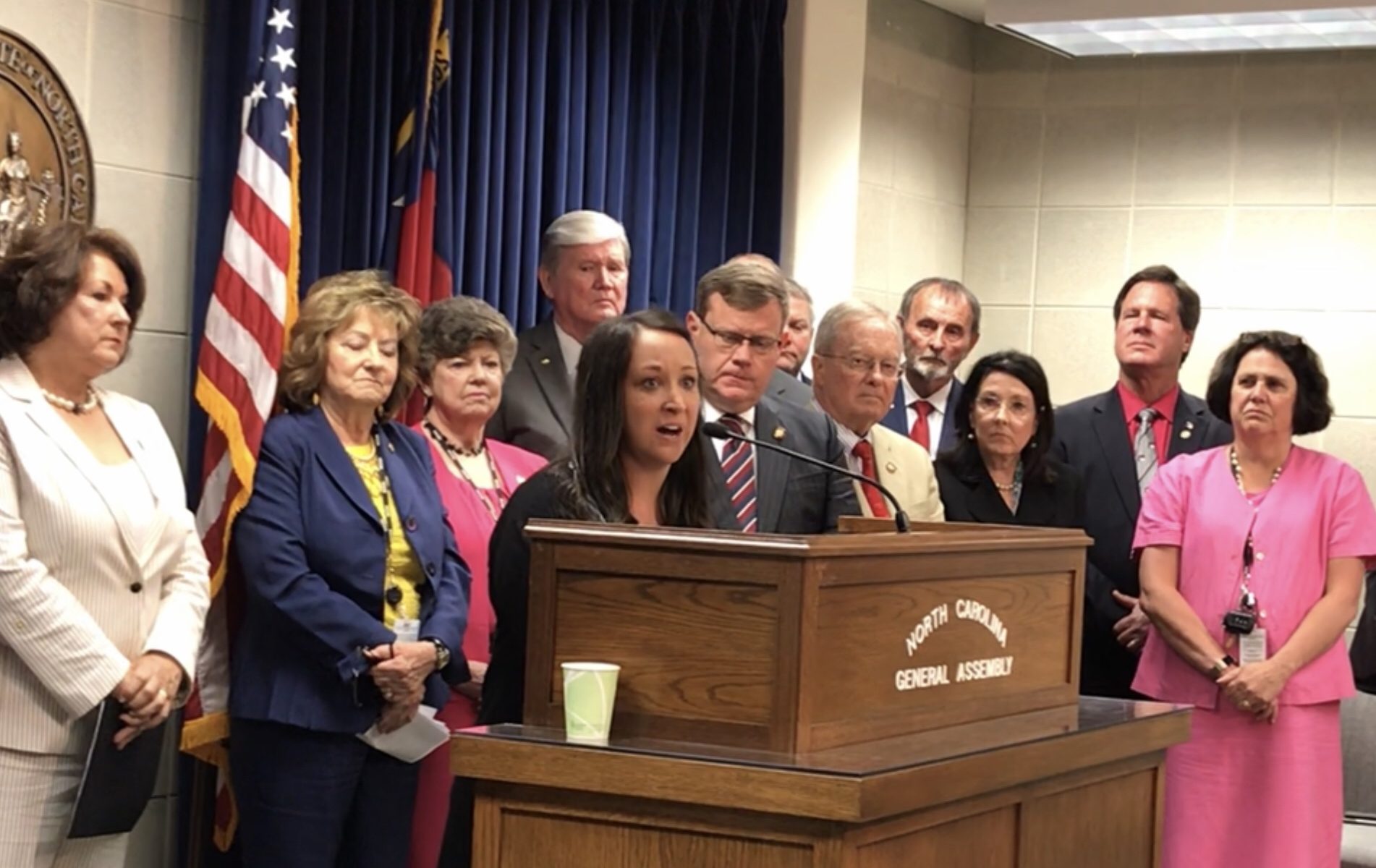 Gianna Jensen and Claire Culwell, abortion survivors who speak publicly to protect born alive children who they say can’t speak for themselves, visited with members of the North Carolina General Assembly ahead of the vote.

Gianna Jensen’s mother sought a late-term abortion at 30 weeks of pregnancy, but Gianna survived and today is an advocate for born alive babies around the world.

“I was born in an abortion clinic in Los Angeles at 6 o’clock in the morning and my medical records do state ‘born during a saline abortion,’ April 6th, 1977, two and a half pounds, 29 ½ weeks, no resuscitation required upon arrival at the hospital,” Jensen said.

“The only reason I was not strangled or suffocated or left to die was because the abortionist wasn’t at work yet.”

Claire Culwell was born two and half months early, weighed only three pounds and two ounces with disabilities from an attempted abortion that took the life of her twin sibling.

“We as survivors are often left out and not talked about and our survival is said to be imaginary,” Culwell said. “Our stories are not imaginary. These are real circumstances that we were born under and we survived real abortions.”

Gov. Roy Cooper vetoed Senate Bill 359 Born-Alive Abortion Survivors Protection Act, which requires a duty of care to every infant born alive in North Carolina, but a bipartisan vote of the state senate overrode his veto. A final veto override vote in the state House is headed to a crucial up-or-down decision on Wednesday.

The legislation only applies when a living, breathing baby is completely removed from a mother’s womb with signs of life like a heartbeat and contains no provisions regarding pre-birth abortion procedures.

The bill passed the state legislature after a federal judge struck down North Carolina’s limitations on abortion after 5 months of pregnancy.
Dr. Johnny Hunter, president of the Life Education Abortion Resource Network (LEARN) was also in attendance. Hunter leads the largest African-American pro-life ministry in the United States, according to the LEARN website.

“Allow me to be brief and very plain: No child should be neglected to die on the day of their birthday,” Hunter said.

“These are instances that have really happened, you’ve seen two people here today who have survived,” Moore said. “This is not theory, this is about real people’s lives.”

“Regardless of whether someone considers themselves pro-choice, or pro-life, this is something we should all be behind. Any civilized society should make sure that a child that is born deserves the same medical care as any other human being.”

Sen. Joyce Krawiec (R-Forsyth), a primary sponsor of S.B. 359, said she was honored to speak alongside abortion survivors Gianna Jensen and Claire Culwell.

“The ladies here with us today, I feel like I know Gianna though I just met her today because I’ve seen her on TV – she has testified before Congress. She is every day out, letting folks know that this happens.”

Rep. Pat McElraft (R-Carteret), the sponsor of the House companion bill to Senate Bill 359, agreed the bill is not about abortion.

“This is about a baby who was born who is living, breathing, a human being, who should not be left on a table or stored in a closet until that last breath is gone,” McElraft said.

“They should be treated like a naturally born child who gets medical attention. That’s all Senate Bill 359 is about. It has nothing to do with the abortion procedure.”

The veto override vote on the Born Alive Abortion Survivors Protection Act is scheduled for the 3 p.m. session in the North Carolina House of Representatives today.